In the final race of the Junior Max, Mohammed Nallwala was back in his form and sealed his leadership position by taking away the chequered flag ahead of everyone. Nirmal Umashanker, Akash Gowda, Manav Sharma and Yash Aradhya fought bumper to bumper for the second and third place finish. It was a clean race with no DNFs (did not finish) and at the end, Nirmal finished second and following him closely was Akash Gowda. With this third place finish, Akash Gowda sealed his championship title in the Junior Max category. As he lifted the trophy, he received a huge applause from his friends from his school who had come all the way to cheer for him. 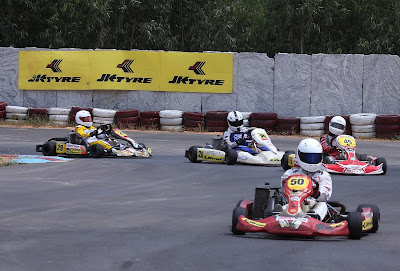 The final race was filled with action as the young lads fought it out. Ricky was leading the race since the beginning. The real fight was between Vishnu, Nayan, Krishnaraj and Ameya who were battling it out on the track. Ricky maintaining his dominance finished the race first. Vishnu Prasad was back in his form and managed to retain his place at the second position throughout the race and clocked the second best time. Ameya who was in the third place as the race began eventually fell behind as Nayan took over and crossing the finish line third.

The winners of Round 5 were awarded in the podium ceremony held after the races. The overall champions of the 12th JK Tyre-FMSCI National Rotax Karting Championship were awarded in a glittering ceremony later in the evening. The 2015 season of JK Tyre-FMSCI National Rotax Karting Championship witnessed a lot of action and excitement and will be back next year for the 13th season of the championship.